Variable versus Fixed What Should a Borrower Do?

If they can deal with variability, we now enter the world of genies, tarot cards, and educated guesswork.

The Governor of the Bank of Canada says the “Goldilocks zone” overnight rate (not too accommodative and not too restrictive), would fall in the 3.5 -4% range (this range may be dropping). With a whole bunch of assumptions, please note that range is close to, if not a double, from current rates.  The Canadian Government and the Bank of Canada both are comfortable, expect, they are leaning towards/want higher interest rates. 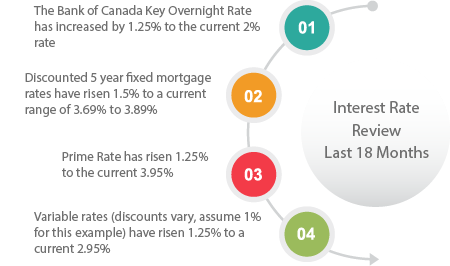 Rates have gone up and are expected to continue going up as long as we have an expanding economy and rising inflation expectations. This is despite Alberta’s current economic state.

Predicting Rates for the Next five years.

Lock in and take five years in the higher 3’s(The 5-year Fixed):

Here is a guess at future rates:

Take a variable and we will guess the Bank of Canada overnight interest rates rising by 0.5 % in the next six months by 1% in the next year after that, by 0.75 % the next year, at this point we would have prime of 5.5% and variable at 4.5% and in the last year and a half of our 5-year term have rates coming down by 0.75 %.  To summarise:

We are as well, guessing on continued economic expansion and then a world or North American or Canadian recession of a mild sort. No vicious recessions. No expansion forever either. Expansion ending sometime in the next year to 2 years.

A reasonable guess on rates suggests, the decision of fixed versus variable, it’s a tossup for the next half year or so. Then the traditional advantage for variable will likely become more obvious.

Last year when fixed rates were below 2.5%, fixed was a clear winner. That was one of the rare periods. However, as rates rise a bit and the economic cycle appears to become more traditional, our answer again is it really about emotional make-up… If you want interest rate and payment stability, choose fixed. If you want the most likely chance at lower interest charges, choose variable (Especially once the next cycle turns).

Many factors can play into the decision besides emotional make-up, financial cushion, debt service ratios, other major necessary purchases during the term, payout penalties.

It is a choice most people ignore and simply request a 5-year fixed, which is revealing in and of itself. People should at least consider Variable.