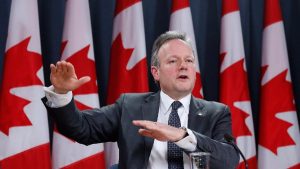 The Bank of Canada held rates steady today, as expected, highlighting “trade policy developments” as an “important and growing source of uncertainty for the global and Canadian outlooks.”

As the seventh round of NAFTA negotiations commenced in Mexico City, President Trump dropped a bombshell late last week, threatening to impose a 25% tariff on imported steel and a 10% tariff on imported aluminum for national security reasons. The news reverberated around the world, causing U.S. trading partners in Europe to announce potential retaliatory actions quickly. The European Union raised the stakes for Trump by aiming levies on the GOP heartland, saying it would slap tariffs on products like Harley-Davidsons, Kentucky bourbon and Levi, bluejeans if President Trump goes ahead with his plan. Paul Ryan, Speaker of the House, is the Republican Representative from Wisconsin, headquarters of Harley-Davidsons. He immediately urged the President to stand down or ‘to be more surgical’ on tariffs. Hardliners such as Secretary of Commerce Wilbur Ross argued that any retribution would be trivial.

Well-known Republican economic advisors to the president warned that the tariff plan would do more harm than good, having adverse effects on consumers and many companies that use imported metals in the production of their products. The number of jobs lost in the auto sector and construction, for example, could be far more significant than the positive impact on the comparatively few jobs in the steel industry mainly in Pennsylvania. Prices of many products would rise including infrastructure costs, energy and food products.

Canada is ground zero in this maelstrom as the number-one exporter of steel and aluminum to the U.S., supplying $7.2 billion of aluminum and $4.3 billion of steel to the United States last year. Trump has often accused China of forcing U.S. steel and aluminum companies to fold by inundating the market with cheaper materials, but Trump thus far has refused to exclude Canada from the tariff proposal, holding Canada hostage to a favourable NAFTA deal.

Canada and the rest of the world are hoping that reasonable voices are going to prevail, but the resignation of Gary Cohen, White House Economic Adviser and formerly President of Goldman Sachs, is a victory for the protectionists (and immigration hawks). A registered Democrat, Cohn was regarded as one the few political moderates close to the president. His absence will amplify voices like Commerce Secretary Wilbur Ross and trade adviser Peter Navarro who back the president’s impulses to buck convention and pick trade fights on a global stage.

Even before the escalating trade tensions, the Bank of Canada was concerned about the impact of rising mortgage rates and new mortgage guidelines on housing, a significant contributor to the 3% growth in the economy last year. “Strong housing data in late 2017, and softer data at the beginning of this year, indicate some pulling forward of demand,” according to the Bank of Canada press release. The central bank is monitoring the economy’s sensitivity to higher interest rates, pointing out that “household credit growth has decelerated for three consecutive months.”

Inflation has edged upward to close to the 2% target. Wage growth has firmed, but even with the hike in minimum wages, the rise in compensation remains smaller than usual at full-employment.

The Bank of Canada commented once again that the economic outlook is expected to warrant higher interest rates over time, but some continued monetary policy accommodation will likely be needed to keep the economy operating close to potential with inflation on target. The next scheduled Bank of Canada policy announcement is April 18 when the full economic outlook will be updated in the quarterly Monetary Policy Report.

To be sure, if the Trump administration goes ahead with the tariffs, the Bank will keep rates steady in April as well. Investors have pared bets on rate hikes after weaker-than-expected fourth-quarter growth, turmoil in global equity markets and the sharp decline in the Canadian dollar. Traders are not pricing in another rate hike until July according to Bloomberg News calculation on overnight index swaps. A month ago, expectations pointed to at least one increase by May. By the Bank of Canada’s measure, interest rates are still about two percentage points below what it would consider “neutral” for the economy.